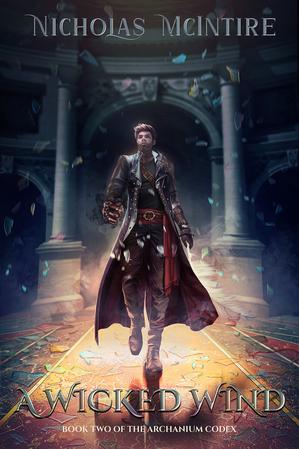 A warrior and his half-angel lover confront a powerful sorcerer threatening their war-torn land in this fantasy sequel.

Civil war has devastated the realm of Ilyar, as rebel forces have besieged its capital. Aleksei Drago, lord captain of Her Majesty’s Legion, couldn’t stop the rebellion but can still protect the queen. He sends her and the princess east—away from the revolutionaries—while he rushes to the enemy’s next targeted city. But it’s the man he loves, Jonas Belgi, who may need his help most. Jonas, the queen’s nephew, prince, and an angel-human hybrid, is up north with the Seraphima. He’s effectively a prisoner since the angels won’t let him leave, ostensibly protecting him from the Demon Bael. This evil Magus has already cursed Jonas with the “Demonic Presence.” If the Presence takes hold of Jonas outside the angels’shields, it could destroy the world. Aleksei plans to free his future husband, but the villains, unable to get their clutches on Jonas, go after the lord captain. He’s soon facing a “wind demon”—a deadly, nearly invisible entity. Elsewhere, someone has taken the princess while Aleksei and others fight to regain Ilyar’s capital. Both Aleksei, a fierce Hunter, and Jonas, a Magus, have formidable abilities. The prince is a shape-shifter, and his lover has the Mantle, an astonishing power that expels tendrils from Aleksei’s body that feed off others’ energies. All the while, Jonas fears he’ll lose control to the Presence, which will terrorize the world using him as its human host.

McIntire’s epic tale accommodates an extensive cast. But the story unfolds across a relatively small landscape, making the various subplots easy to follow. For example, the search for the princess entails traveling west to Fanj, and a menace awaits in the mountains along the way. Despite the lengthy narrative, tension remains high throughout; Bael and his ilk provide a constant threat, abducting some and killing others as the war rages. There’s action, too, though it’s often over in a flash, especially since the Mantle effortlessly dispatches villains. This curious being, which occasionally talks to Aleksei and demands to feed, somewhat resembles the Marvel character Venom. The lord captain’s indisputable strength fuses well with his devotion to Jonas; even with only a spattering of romantic interludes, his love clearly drives him. But supporting characters don’t let the two leads completely steal the spotlight. Katherine, Aleksei’s friend, braves enemy territory as a spy. Aleksei’s cousin Roux Devaan shows off his “Darting” skill, which allows him to “flicker from one point to another.” McIntire complements his characters and worldbuilding with lucid details: “The market had been built in the center of the village, a great open ring of small booths that appeared to have stood for decades….Above each booth was a strip of brightly dyed cloth, Fanja script painted roughly across it alongside pictograms, displaying the nature of the wares available.” Though the author ties up a few subplots, he leaves unresolved bits for the series’ third installment.

A vibrant array of colorful characters guides readers through this absorbing fantasy.