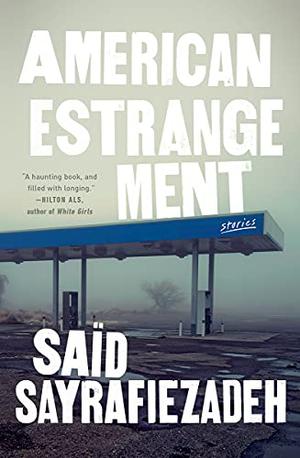 Estrangement, the act of being separate from a person or group with whom you were once close, is the definitive condition of Sayrafiezadeh’s America and the binding agent of his lyrical, funny, and disquieting collection. In “Scenic Route,” a couple so incompatible that they’re dumped by their couples counselor try to heal their relationship by driving together across the United States…except the states are not united; visas are necessary; the state lines are guarded by border patrol agents; and as the couple progress westward, they encounter increasing antagonism, some of it generated by their incompatibility, the rest by the xenophobic land in which they once, as fellow Americans, belonged. In “Fairground”—another dystopian romp—our narrator is taken to a public hanging at age 6 or 7 or 8 by Mr. Montgomery, his stepfather at the time. Why go to a hanging? Because going to executions “was what fathers did with sons.” The hanging is in the high school football arena, and Mr. Montgomery buys the narrator a “jumbo-sized” popcorn and excitedly explains “how in his day they didn’t have hangings, but shot the condemned instead. In his father’s day, they were beheaded with silver sabers, and so on down the line: guns, swords, poison, fire.” Meanwhile, the narrator muses about Mr. Montgomery’s impermanence in his life, which is obvious to him if not to Mr. Montgomery. Sayrafiezadeh’s collection is mostly masterful and always fun, but its final story, “A Beginner’s Guide to Estrangement,” may be its most affecting. Here our narrator is Danush Jamshid, aka Danny McDade, who is nearly 35 years old and has seen his biological father only twice in the last 30 years. Now, despite the State Department’s level 4 travel advisory, he has flown into Tehran to visit his aging father. But given the fraught political history between the U.S. and Iran, and given the fact that Danny’s father abandoned Danny and his mother…well, both parties know this reunion, which is supposed to last just five days, constitutes their last chance to build what could have been a lifelong relationship. An elegy for a more united past? A warning against a less united future? A lyrical sequence of stories about infinitely various forms of personal and familial and political estrangement that we fragile humans allow to define our lives? All of the above? Check.