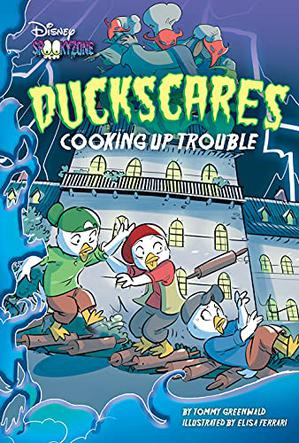 It’s not truffles but doubloons that tickle this porcine wayfarer’s fancy.

Funke and Meyer make another foray into chapter-book fare after Emma and the Blue Genie (2014). Here, mariner Stout Sam and deckhand Pip eke out a comfortable existence on Butterfly Island ferrying cargo to and fro. Life is good, but it takes an unexpected turn when a barrel washes ashore containing a pig with a skull-and-crossbones pendant around her neck. It soon becomes clear that this little piggy, dubbed Julie, has the ability to sniff out treasure—lots of it—in the sea. The duo is pleased with her skills, but pride goeth before the hog. Stout Sam hands out some baubles to the local children, and his largess attracts the unwanted attention of Barracuda Bill and his nasty minions. Now they’ve pignapped Julie, and it’s up to the intrepid sailors to save the porker and their own bacon. The succinct word count meets the needs of kids looking for early adventure fare. The tale is slight, bouncy, and amusing, though Julie is never the piratical buccaneer the book’s cover seems to suggest. Meanwhile, Meyer’s cheery watercolors are as comfortable diagramming the different parts of a pirate vessel as they are rendering the dread pirate captain himself.

A nifty high-seas caper for chapter-book readers with a love of adventure and a yearning for treasure. (Adventure. 7-9)