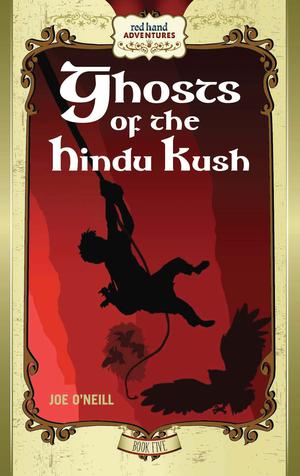 As described in four previous books, Fez, Tariq, and Aseem—boys who were once enslaved by a Moroccan ruler—have since had many death-defying, cross-continental escapades. It’s now 1915, the Great War rages, and they must take Alexander the Great’s diary containing teachings of the secret Red Hand society to India, traveling through the savage Hindu Kush mountains with a Russian guide. Meanwhile, fellow formerly enslaved 17-year-old Margaret Owen, a skilled pilot, flies with her father to Morocco to meet with tribal leader Malik and gain his support for the Allies; he agrees, if they’ll escort two women Margaret knows to Russia. In France, Margaret’s former schoolmate Inez nurses wounded soldiers; she’s astonished to see Reinhold, a German who’d once rescued her (and with whom she shared a kiss), among the injured prisoners of war, and she concocts a clever scheme to help him escape the firing squad. As these adventurers pursue their goals, they encounter danger, treachery, sabotage, hairbreadth escapes, and the sinister attentions of the dark arts–practicing Russian monk Razikov and his team of loyal assassins. In this fifth installment of the Red Hand saga, O’Neill continues to work his magic. The ingredients are irresistible: spycraft, magic, international travels, cultural rituals, derring-do, fights (which are often quite violent), exotic locations, and many chances for the young characters to prove their courage, fortitude, cleverness, and resilience. Inez, for example, crafts a brilliant cover story for herself and Reinhold involving mapping routes for a wartime Tour de France, while the three boys must earn a tribe’s acceptance by descending a cliff to steal an eaglet from a nest. Although the overall plot is unresolved, the ending will whet readers’ appetites for more.