Home What's New INSIDE THE SUITCASE 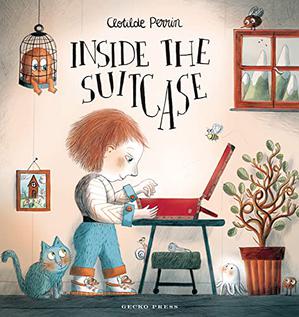 Refined, spit-spot–tidy illustrations infuse a spare adaptation of the 1934 classic with proper senses of decorum and wonder.

Novesky leaves out much—the Bird Woman, Adm. Boom, that ethnically problematic world tour, even Mr. and Mrs. Banks—but there’s still plenty going on. Mary Poppins introduces Jane and Michael (their twin younger sibs are mentioned but seem to be left at home throughout) to the Match-Man and the buoyant Mr. Wigg, lets them watch Mrs. Corry and her daughters climb tall ladders to spangle the night sky with gilt stars, and takes them to meet the zoo animals (“Bird and beast, star and stone—we are all one,” says the philosophical bear). At last, when the wind changes, she leaves them with an “Au revoir!” (“Which means, Dear Reader, ‘to meet again.’ ”) Slender and correct, though with dangling forelocks that echo and suggest the sweeping curls of wind that bring her in and carry her away, Mary Poppins takes the role of impresario in Godbout’s theatrically composed scenes, bearing an enigmatic smile throughout but sharing with Jane and Michael (and even the parrot-headed umbrella) an expression of wide-eyed, alert interest as she shepherds them from one marvelous encounter to the next. The Corrys have brown skin; the rest of the cast presents white.

Lovely and evocative, just the thing to spark an interest in the original and its sequels—and the upcoming film sequel, Mary Poppins Returns, which opens in December 2018. (Picture book. 6-8)