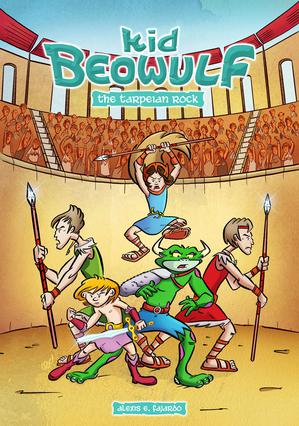 A middle-grade graphic novel featuring the future founders of the Roman Empire.

Kid Beowulf, a human, and his brother, Grendel, who looks like a green, monstrous creature, are enslaved by Spumae, who runs a fighting ring. Prince Tatius from Sabina purchases the pair to train as gladiators and promises their freedom if they fight well. The Sabines sacrifice a member of the Latin tribes every year at their annual games, but this year, three youngsters speak out against the practice: brothers Romulus and Remus, and their friend Tarpeia. To save the kids from punishment, the boys’ guardian, Faustalus, steps in to be sacrificed in their stead. Tarpeia helps Romulus and Remus sneak into the games, as they hope to take their revenge on the King of Sabina—but Kid Beowulf and Grendel challenge them, thinking that the boys are gladiator combatants. Remus is captured, Grendel is wounded, and both sets of brothers are separated. Romulus must come up with a plan to free his brother and carry out his mission. Meanwhile, Prince Tatius, worried about the future of his country and his people, starts to plot against his father, leading him to form uneasy alliances. In this fourth series entry, author/illustrator Fajardo offer an engaging story. It opens with a rhyming tale of the foundation of Rome, although the rest of the novel differs from the myth. (A few pages of historical explanation appear at the end.) A jump back in time makes the chronology a bit confusing, but once it catches up to Kid Beowulf and Grendel’s era, the pacing smooths out and the story unfolds in a satisfying fashion. Despite being the title characters, Beowulf and Grendel don’t feature very heavily, as Romulus, Remus, and Tarpeia steal the spotlight. Much of the book takes place in the gladiatorial arena, but the violence isn’t very graphic. The bright, colorful illustrations present easy-to-follow action scenes. Each character is distinctive, and even identical twins Romulus and Remus are easy to tell apart, due to differing hairstyles.