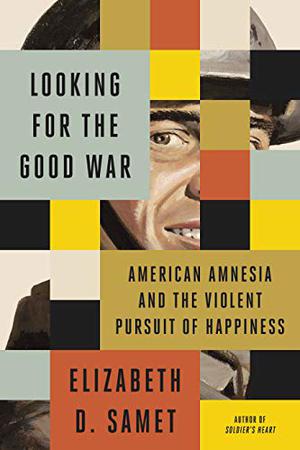 Samet investigates a vital question: “Has the prevailing memory of the ‘Good War,’ shaped…by nostalgia, sentimentality, and jingoism, done more harm than good?”

The author, a professor of English at West Point, engages in a simultaneously deep and wide exploration of the way the meaning and memory of World War II have shaped American identity, its sense of standing in the world, and narratives of other wars: Korea, Vietnam, the Gulf War, “and, retrospectively, the Civil War.” Drawing on a vast number of sources, including histories; firsthand accounts in letters, memoirs, and reportage; fiction; movies (produced during and after the war); comic books; and the Army’s guidebooks for soldiers, Samet smoothly distills the myths Americans have told themselves to justify the epithet of the “Good War” for a noble battle to liberate the world from fascism. That self-righteous myth, Samet asserts, “appeals to our national vanity, confirms the New World’s superiority to the Old, and validates modernity and the machine.” The experience of the war was marked by disillusion and confusion in the battlefield and on the homefront. The author underscores the ambivalence that pervaded the nation. Even as reports circulated about Nazi atrocities, most Americans were indifferent. The Pacific war, writes Samet, was “complicated by bitter racism” against the Japanese, while postwar novels and films “exhibit [the] confusion, discontent, and disaffection” felt by many returning soldiers. Furthermore, violence became not just associated with battle, but “an end in and of itself.” For example, “in the absence of a foreign enemy against whom to deploy their violence, comic books moved in the direction of brutality and horror.” Violence remains a lasting legacy of the war, leading Americans “repeatedly to imagine that the use of force can accomplish miraculous political ends even when we have the examples of Vietnam, Iraq, and Afghanistan to tell us otherwise.” Not just timely, Samet’s work is incisively argued and revelatory in its criticism.

A cogent analysis of the cultural realities of war.