Home What's New ONCE MORE TO THE SKY 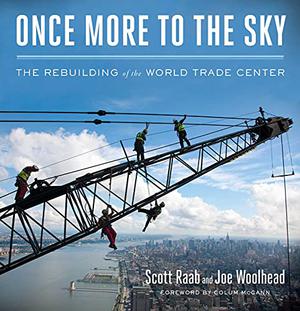 In 2005, journalist Raab was assigned to cover the rebuilding of the World Trade Center for Esquire. To commemorate the 20th anniversary of 9/11, he has gathered the essays from his 10-part series, published yearly, complemented by dozens of gritty, vibrant photos by Dublin-born Woolhead, the official site photographer. Raab takes an irreverent, often cynical view of the political grandstanding, rivalries, and arrogance that emerged during the planning and construction. George Pataki, New York’s governor when the towers fell, saw rebuilding as a personal achievement that he hoped would take him to the White House. Irascible real estate mogul Larry Silverstein, the first chief developer, “nursed every nickel, but he also knew the historical heft, and the spiritual demands, of the Freedom Tower.” David Childs, chief architect, was repeatedly frustrated by the Port Authority, owner of the site. “The seismic social forces that first raised up the Twin Towers—politics, power, and money—have poured into the vacuum created by their collapse,” Raab observed. Building the towers depended on workers—engineers, blasters, welders, steel workers—whom Raab portrays with warmth and respect. While one engineer worried over the geophysical forces that would impact the structure, Raab notes many other forces—“money, memory, money, vanity, money, ingenuity, money, New York City’s infinite resolve and resilience, and money”—that challenged the project’s completion. Because the pieces appeared over 10 years, repetition (Silverstein’s undaunted determination, the Port Authority’s obfuscation) is inevitable. Nevertheless, the book effectively conveys the emotional power of the fraught $4 billion project. Now, 20 years later, writes Raab, “facing a collective grief, suffering, and outrage on a scale beyond anything we’ve known in our lives, the Freedom Tower’s spire reminds me that nothing—no act of terrorism, no natural disaster, no pandemic: nothing—is stronger than the human spirit of community.” Colum McCann provides the foreword.

A revealing and visually appealing history of an architectural triumph.