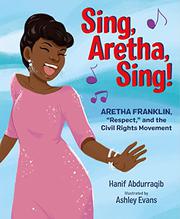 In his picture-book debut, National Book Award longlisted author Abdurraqib traces Aretha Franklin’s groundbreaking career as a singer and her legacy as a civil rights activist. Beginning with her childhood singing gospel in her father’s church, the story covers her time traveling with Dr. Martin Luther King Jr., her rise to international stardom, and the emergence of her iconic signature song “Respect” as a popular and powerful anthem of Black and female empowerment during the 1960s. The text is written mostly in simple expository prose except for an acrostic poem on one double-page spread in which the first letters of each line spell out the word respect. Evans’ vibrant digital illustrations highlight Franklin’s beauty and vitality and the racial diversity of the people who were in her thrall. As acknowledged in the backmatter, attempting to encapsulate all that Franklin was in a picture book is a difficult task, and indeed, the book feels overambitious at times, but its message regarding music’s power to help love conquer hate is compelling.