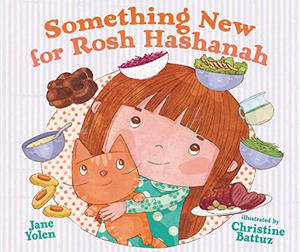 Oliver, of first-day-of-school alligator fame, is back, imagining adventures and still struggling to find balance between introversion and extroversion.

“When Oliver found his egg…” on the playground, mint-green backgrounds signifying Oliver’s flight into fancy slowly grow larger until they take up entire spreads; Oliver’s creature, white and dinosaurlike with orange polka dots, grows larger with them. Their adventures include sharing treats, sailing the seas and going into outer space. A classmate’s yell brings him back to reality, where readers see him sitting on top of a rock. Even considering Schmid’s scribbly style, readers can almost see the wheels turning in his head as he ponders the girl and whether or not to give up his solitary play. “But when Oliver found his rock… // Oliver imagined many adventures // with all his friends!” This last is on a double gatefold that opens to show the children enjoying the creature’s slippery curves. A final wordless spread depicts all the children sitting on rocks, expressions gleeful, wondering, waiting, hopeful. The illustrations, done in pastel pencil and digital color, again make masterful use of white space and page turns, although this tale is not nearly as funny or tongue-in-cheek as Oliver and His Alligator (2013), nor is its message as clear and immediately accessible to children.

Still, this young boy’s imagination is a powerful force for helping him deal with life, something that should be true for all children but sadly isn’t. (Picture book. 3-5)