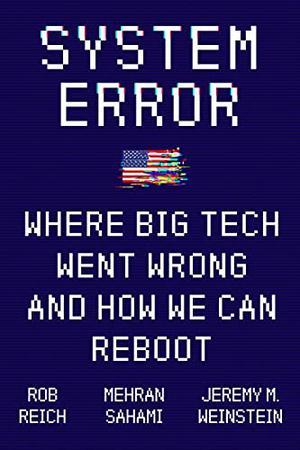 The technological future promises to be a dark one—unless, as the authors insist, technology is pressed into the service of doing no harm, as once promised.

Media technology often taps the worst in our instincts, driving misinformation, exploiting gullibility, and even inciting violence. The authors, Stanford professors and longtime familiars in Silicon Valley, assert that the owners and operators of Facebook, Google, Amazon, and others have wrought more ill than good on many fronts: As engineers, they lack knowledge of public policy; as influencers of public policy, such as they understand it, they tend to a hands-off view that resists government intervention; as systems thinkers, they tend to despise democracy and instead, their demand for independence taken fully into account, to favor a technocratic view. Indeed, in one interesting thought experiment, a number of Silicon Valley leaders were asked what sort of society they might form if given the power to do so. They answered that they’d want a big patch of land, preferably an island, and certainly not a democracy as the form of government. Said one, “To optimize for science, we need a beneficent technocrat in charge. Democracy is too slow, and it holds science back.” As such, it’s no wonder that big tech has allowed for the amplification of anti-democratic views that go from the Ayn Rand–ian to the neofascist. In accessible prose, the authors argue that social media–wrought social engineering must be curbed. Along the way, they examine the effects—sometimes beneficial, mostly not—of algorithmic decision-making, which some enthusiasts argue will one day make lawyers and doctors redundant. The authors insist that such decision-making must be transparent, auditable, and accountable to norms of due process. In this illuminating account, they even offer a few rays of hope—e.g., actual hate speech on the web is surprisingly rare. Of course, they add, rare or not, it can lead to horrible behavior.

Of interest to futurists and civil libertarians alike.