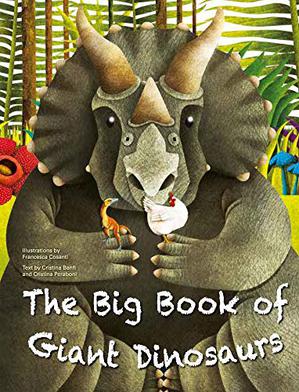 Imported from France, a gallery of dinosaurs and prehistoric reptiles, animated by pop-ups, spinners, and pull-tabs.

A pair of oversimplifications—that dinosaurs “no longer exist” but “entire skeletons” can be viewed in museums—starts the survey off with a resounding thud. Following this, in a disconnected ramble, topical spreads deal with the science of paleontology, the life cycle of Saltasaurus from egg to adult, defense mechanisms, big dinos, and, for an abrupt close, sea life. Some dinos feature feathers or crests in a low-contrast second color, but most are monochrome and all so simplified in form that, for instance, there’s almost no discernible difference between dull-hued Diplodocus and Brachiosaurus, immediately above it. The interactions are no great shakes either. Except for an initial spread-spanning folded flap, the pop-ups are printed on only one side, and the swings of the pull-tab tails of Ankylosaurus and Diplodocus aren’t even slightly realistic. Flora and fauna feel arbitrarily placed, and some feature unhelpfully generic labels such as “school of fish,” or “rodents” rather than actual identifiers. The co-published Firefighters, written by Anne-Sophie Baumann and illustrated by Benjamin Bécue, opens with an exploding building but otherwise offers a similarly flat assortment of general facts and low-rent special effects. In both volumes human figures, where they appear, are diverse in gender presentation, age, and skin color.