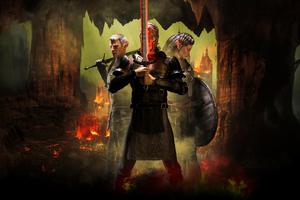 From the Between Earth and Sky series , Vol. 1

A powerful priest, an outcast seafarer, and a man born to be the vessel of a god come together in the first of Roanhorse’s Between Earth and Sky trilogy.

The winter solstice is coming, and the elite members of the sacred Sky Made clans in the city of Tova are preparing for a great celebration, led by Naranpa, the newly appointed Sun Priest. But unrest is brewing in Carrion Crow, one of the clans. Years ago, a previous Sun Priest feared heresy among the people of Carrion Crow and ordered his mighty Watchers to attack them, a terrible act that stripped the clan of its power for generations. Now, a secretive group of cultists within Carrion Crow believe that their god is coming back to seek vengeance against the Sun Priest, but Naranpa’s enemies are much closer than any resurrected god. Meanwhile, a young sailor named Xiala has been outcast from her home and spends much of her time drowning her sorrows in alcohol in the city of Cuecola. Xiala is Teek, a heritage that brings with it some mysterious magical abilities and deep knowledge of seafaring but often attracts suspicion and fear. A strange nobleman hires Xiala to sail a ship from Cuecola to Tova. Her cargo? A single passenger, Serapio, a strange young man with an affinity for crows and a score to settle with the Sun Priest. Roanhorse’s fantasy world based on pre-Columbian cultures is rich, detailed, and expertly constructed. Between the political complications in Tova, Serapio’s struggle with a great destiny he never asked for, and Xiala’s discovery of abilities she never knew she had, the pages turn themselves. A beautifully crafted setting with complex character dynamics and layers of political intrigue? Perfection.

Mark your calendars, this is the next big thing.