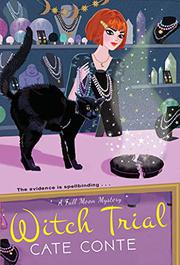 The neighbors in her Connecticut town call the proprietor of the Full Moon crystal shop Violet Mooney, but she recently discovered that she’s actually Violet Raven Moonstone, the daughter and granddaughter of witches. Flexing her newly discovered otherworldly muscles, Vi can see a shadowy aura enveloping Nicole St. James, a lawyer friend of Ginny Reinhardt’s, another witch whose “specialized maid service” cleans up infernal messes. Vi gives Nicole, who’s recently left Odin, Steele and Rabner for the firm of Townsend and Hammerstein, some stones specially chosen to help banish her aura, but they don’t help: A few days after she’s reported missing, Nicole’s found bashed to death in a nearby park. Vi would seem the logical candidate to help local cop Gabe Merlino, who’s dating her half sister, Zoe, solve the murder if she didn’t already have her hands full with a problem of quite another sort. Someone has “genied” Mariza Diamond, an undercover reporter who tried to expose Vi, into a puddle of goo inside the Full Moon, and Oscar Sageblood, a member of the Magickal Council, accuses Vi and Zoe of knowing much too much about the transformation. The extensive cast of witches, whose numbers rival those of the mortal townspeople, sets up a striking parallel between the worldly and otherworldly justice systems that’s the most consistently amusing feature here. That’s just as well, because the solution to the mystery of who killed Nicole feels almost like an afterthought.

THE 31 NEAR DEATH EXPERIENCES OF JENNY BLACK